A brief outline of my time in Trenton, NJ…

In 2005, Steve and I moved from Albuquerque, NM, to Trenton, NJ. He came out before me and I followed him after the house in Albuquerque sold. Our cats and dogs came with us. We flew out our cats Max and Cleo by plane, but drove the dogs, Panda and Buster, cross country in the camper shell of our pickup truck.

Steve found us a wonderful place to live, a center hall, Dutch colonial built in 1915 and formerly inhabited by the McPhersons and Mary Roebling’s personal secretary. The house is located on a charming, dead-end street in an historic neighborhood which is beautiful, quiet, and accessible to downtown and major routes in and out of the city.

During Advent of 2005, I started attending St. Michaels Church, Trenton, a parish founded in 1703, which met in a building bombed by General Washington during the Battle of Trenton. I became an assistant to the priest and found myself with a variety of duties ranging from creating a choir and reintroducing Gregorian chant to publishing the weekly bulletins for worship. I also enjoyed helping to craft the liturgy as well as being a cantor. In December of 2008, Fr. Harte announced his departure for a congregation in Pennsylvania and I decided I should move on, myself.

I wasn’t quite sure where to move on to. I joined the choir of Trinity Church Princeton (where I was confirmed in 1990) for a time and made beautiful music there.

I started working at the New Jersey Housing and Mortgage Finance Agency, first as a temp, then as an Assistant in the Housing Affordability Service division. I made many friends there and came to realize the very real struggles and barriers low and very-low income persons in our society face in the pursuit of simple needs such as a roof over their heads to raise a family.

Finding myself in a stable environment in which to pursue higher level interests, I started taking classes at the General Theological Seminary of the Episcopal Church, where I found a stimulating environment in which to grow my mind. As a commuter student, however, I felt cut off from the rich flow of Seminary life. Nevertheless, I persevered as a non-degree student, taking life-changing courses such as “Discernment” with Dr. Elizabeth K. J. Koenig and “The Gospel of John” with the Rev. Dr. John T. Koenig.

I started attending Trinity Episcopal Cathedral, Trenton, joined the choir, and became active in youth ministry on the parish level. I was elected to the vestry twice.

I was appointed to the Youth Council of the Episcopal Diocese of New Jersey and became very active in diocesan youth events and youth ministry.

Feeling a strong call to the ordained ministry, I entered the discernment process for the Episcopal priesthood on the parish level. It was a grueling experience which I survived by the grace of God. I was rejected as a candidate for postulancy, launching me into one of the most painful experiences of my life. Again, by the grace of God, good therapy, and loving relationships, this turned out to be a rich source of learning and reflection and growth in my life.

In September 2015, I became a board member of the I Am Trenton Community Foundation, an organization which raises funds and consciousness to support grassroots efforts to make Trenton a better place to grow up in and live.

Also, in September 2015, I left my job with the New Jersey Housing and Mortgage Finance Agency to accept the position of Director of Youth Ministries at Trinity Episcopal Church, Asbury Park. For financial reasons, my position was eliminated in January 2016, and I was warmly received back at Trinity Cathedral in Trenton. 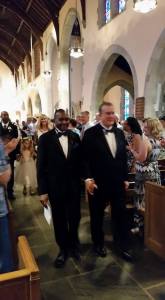 On Saturday, June 18, 2016, Steve and I were married by the Rt. Rev. William Hallock  (Chip) Stokes, D.D., the twelfth bishop of the Episcopal Diocese of New Jersey, at Trinity Cathedral in Trenton.

As of 12 November 2018, I am still living in Trenton, working at the Flemington Free Public Library doing social media, supervising Mediatech (a drop-in center for youth to play video games), struggling to write fiction and working to help great things happen for the city.

Find out more about what I’m doing now on my blog.

back to
Where I’ve been…